Welcome to Enter The Lodge, a fan-made work of “Twin Peaks” Twitter fiction.  This project is produced by “Twin Peaks” fans for “Twin Peaks” fans, to celebrate the characters created by David Lynch, Mark Frost and the rest of the show’s writers and producers.

To get started, follow @EnterTheLodge on Twitter to keep abreast of the latest updates to the site.  Then click into the Characters section of our site, and follow the Twitter accounts we’ve set up for Dale Cooper and the rest of the show’s cast.  You can follow the story in real-time on Twitter, or tune in here five days a week, where each individual scene will be archived in our Story section.

Our story begins in March of 1989 with the penultimate episode of the TV series, and moves forward from there.  Since Twitter did not exist in 1989, the conceit isn’t that these characters actually have Twitter accounts; rather, Twitter is simply the medium we’re using to tell the story.

Our story also functions within a present-day framing device: Click over to the Documents section of our site to see glimpses of in-world texts that give you, the reader, access to knowledge that remains unknown to some or all of the characters in the story.

This is a strictly not-for profit venture, and is in no way affiliated with David Lynch, Mark Frost of CBS.  We hope the project encourages old and new fans alike to purchase the soon-to-be released “Twin Peaks” Blu-ray set.  We’d like to thank David Lynch, Mark Frost and CBS for producing a television series that has delighted fans for the past 25 years, and hope that our little project can introduce the franchise to an entire new generation of fans who will enjoy it for years to come. 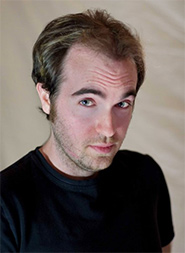 A writer by trade, Emmett hails from Philadelphia but now calls L.A. his home. He was a staff writer at Comic Book Resources for 3 years, and wrote for “BlackBxx: Haunted”, an experimental web series helmed by the creator of HBO’s “Carnivale”, Daniel Knauf. He’s also written and produced two web series of his own, the ghost-hunting comedy “Bumps in the Night” and the transmedia superhero drama “Fury of Solace”. He is on the leadership team for Transmedia L.A., an organization dedicated to both educating the world at large about transmedia storytelling and to facilitating the creation of new kinds of transmedia stories. Emmett is also the transmedia producer for the upcoming web series “The New Adventures of Peter and Wendy”, a modern-day update of J.M. Barrie’s classic “Peter Pan” story. To catch up with him about “Enter the Lodge” or any of these other projects, follow Emmett on Twitter. 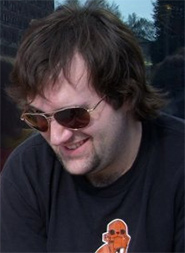 Patrick lives, writes, and generally exists in Washington, D.C.  He loves any good fiction, but is most partial to ongoing storylines that embrace complex continuity and evolve over time. While this is most often the realm of television, he embraces any story brave enough to build into a larger narrative regardless of medium. He dreams of a day when telling stories across multiple platforms in a cohesive, compelling way is the norm rather than the exception (whether those formats be film, TV, video game, comic, or web, he’ll accept any or all). Patrick dabbles in screenwriting and prose but usually tends to find himself drawn back toward writing for television. Patrick also loves the story and continuity of a good season of baseball, even if the narrative and the numbers don’t always agree. To catch up with him about “Enter the Lodge”, great fiction, or just engage in random pun-slinging, follow Patrick on Twitter.